If you live in Phoenix. You know one thing for sure, it’s a big place. Pretty spread out geographically.

In real estate terms this large area means big differences in price across locations. It also means that using statistics for the entire metro area may not reflect accurately what’s going on in a smaller pocket.

All that said referencing the overall market can be useful as a starting point.

One of the most notable real estate market indexes is the Case Shiller published by Standard & Poors.

I took the data they publish and made the chart below. It runs from January 1989 to June 2012. 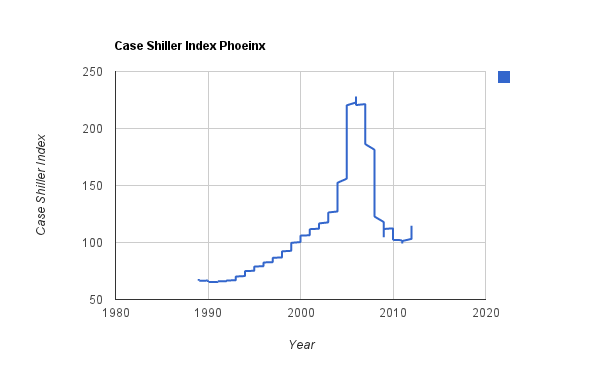 Sometimes it’s easy to forget just how dramatic the market has been in the last 7 or 8 years.

When determining your buying and selling decisions you definitely need to think far more locally than this but it’s sometimes useful to just visualize where you bought on the timeline and what that might mean for your home.